Red Dog is one of the most simple card games in the Casino and has been around for a long time under other names such as “Acey-Duecy”, “In Between” or “Between the Sheets”. The game seems to be declining in live Casinos but is readily available in On line Casinos. It is fast and easy to understand and play and requires no special skill. 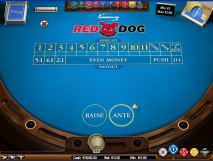 The tables for Red Dog can have a slightly different layout between Casinos but it should be fairly obvious even to a beginner where to place your bet and where your cards will be. A typical layout is shown here.
The game is normally played with a single deck of cards containing 52 cards (in other words no jokers). The cards are shuffled after each deal so remembering which cards were played in previous hands is of no benefit.
In the game you will be dealt two cards face up and a third card face down. A winning hand is achieved when the face down card has a value that is in between the values of the other two cards. It really is that simple.

How to play Red Dog

Each Casino has its own graphics and methods of placing bets so we recommend that you read the instructions for the particular casino in which you wish to play. The basic principles however remain the same. Most Casinos have a “Free Play” option that will enable you to practise placing bets.
First select the stake that you wish your chips to represent, then place your chip or chips on the table to indicate how much you want to bet in that particular hand. This is called the “Ante”. Each hand is played independently so you can vary your stake each hand if you so wish.
Once you have placed your bet the dealer will deal two cards FACE UP. You may have to click on a button that says “deal”. There are now a number of things that can happen depending upon the cards dealt. Remember that to have a winning hand the third card dealt must have a value that lies between the value of the first two cards. The value of the cards is 2 through Ace in ascending order. Ace is always high in Red Dog. For example; if you are dealt a 6 and a Jack your third card must be a 7 or an 8 or a 9 or a 10 for you to win. If you are dealt an Ace and a 2 then any card except another Ace or another 2 will create a winning hand.
Firstly, if your two cards are consecutive (for example a 6 and a 7 or a Queen and a King) it is not possible to have a third card with a value in between them so the hand is declared a push, your stake is returned and the hand is over.
If your two cards are a pair (two cards of the same value) a third card is dealt straight away without any further input from the player. If this third card is the same value as the first two you win at odds of 11:1. In other words you get your stake back plus another 11 times your stake. If the third card is not the same value as the first two cards the hand is declared a push, you get your stake back and the hand is over.


It is as simple as that.

The Best of Luck