Let It Ride is a simplified form of Poker where you are playing against the house and not against other players. It is an ideal game for beginners to Poker as the decisions that need to be made are few, there is no bluffing involved and you can play at your own pace.
The game is relatively new having been introduced to Casinos in 1993. It was invented by a company called ShuffleMaster Gaming which also makes automatic shuffling machines for Casinos. 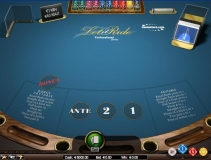 The tables for Let It Ride can have a slightly different layout between Casinos but it should be fairly obvious even to a beginner where to place your bet and where your cards will be. A typical layout is shown here.
The game is played with a single deck of cards containing 52 cards (in other words no jokers).
Each deal uses a fresh deck so noting which cards appeared in the previous deal is of no value.
The table will have areas for 4 bets usually labelled $, 1, 2, and Bonus and should display the payout odds for the various hands. The object of the game is to form a 5 card poker hand of one pair of tens or better which then pays out against fixed odds. Unlike some other Casino games the house does not have a hand.

How to play Let it Ride

Each Casino has its own graphics and methods of placing bets so we recommend that you read the instructions for the particular casino in which you wish to play. The basic principles however remain the same. Most Casinos have a “Free Play” option that will enable you to practice placing bets.
First select the stake that you wish your chips to represent, then place your chip or chips on the table to indicate how much you want to bet in that particular hand. There will be a minimum and maximum allowable bet for each table. Each hand is played independently so you can vary your stake each hand if you so wish. You need to place the same size bet on each of the three main betting areas ($, 1, 2). In on line Casinos this is usually done automatically once you have decided the size of the bet. You can also choose to place a bet for a Bonus ( sometimes called a Side Bet). More about that later.

Once you have placed your bets the dealer will deal three cards to you and two cards to a common area on the table. The three cards dealt to you would be FACE DOWN in an actual casino but in an on line casino this would make them pretty difficult to see so they are dealt FACE UP. The other two cards are FACE DOWN. These two face down cards are called the Community Cards. In an actual Casino there will be more players seated around the table and each player will make a 5 card Poker hand using the three cards dealt to them plus the two common community cards. In the on line version you are playing on your own but you are still using your three cards plus the two community cards to form your hand.
Your next decision is based on your chances of having a 5 card poker hand of one pair of tens or better. At this point you can only see your three cards so you are gambling on what the two community cards are. You have three bets on the table and you have the opportunity to withdraw two of these during the game. This is your first opportunity and concerns bet 1. If you do not like the three cards you have and you do not think you can form a good enough hand you can withdraw bet 1. If on the other hand you think you can form a winning hand then you allow bet 1 to stand or Let It Ride
The dealer will then turn over one of the two community cards.
You can now see four cards and you have the opportunity to withdraw bet 2 or Let It Ride again based on your chances of being able to make a poker hand of one pair of tens or better.
At this point you cannot change your decision about bet 1 but your options for bet 2 are unaffected by your previous decision about bet 1. You can withdraw bet 2 or Let It Ride regardless of what you did at bet 1.
Once you have made your decision about bet 2 the dealer will turn over the second community card and you can form your hand. A winning hand will be paid out according to the odds stated on the table against all bets remaining on the table.

A word of warning:

The odds paid are not always the same so check the odds you are playing before you start. There may also be a maximum payout on the table so check that your bets are such that your possible winnings are within the limits.

For those of you who are not familiar with Poker Hands here is an explanation. The following hands are in ascending order of importance.

ONE PAIR: This is two cards of equal value; for example: two 2s or 2 Kings. The highest pair is Aces followed by Kings, Queens etc down to the lowest pair which is 2s. In Let It Ride you need at least a pair of tens to win.

TWO PAIRS: This is similar to One Pair but you have two of them. For example: two 2s AND two Kings. Your two pairs can be any value in Let It Ride.

THREE OF A KIND: This is three cards of the same value eg: three 2s or three Queens. As with two pairs your three of a kind can be any value to win.

STRAIGHT: This is five cards in sequence that are not all the same suit; for example: three, four, five, six, seven; or Ace, King, Queen, Jack, Ten. Ace can also count as one as in Ace, two, three, four, five.

FLUSH: This is any five cards of the same suit (Hearts, Clubs, Diamonds, Spades).

FULL HOUSE: This is a PAIR + THREE OF A KIND. Any value of pair or three of a kind qualifies as a win in Let It Ride.

FOUR OF A KIND: This is four cards of equal value; for example: four 2s or four Kings.

STRAIGHT FLUSH: This is a STRAIGHT (see above) but the cards are all the same suit.

ROYAL FLUSH: This is the highest hand and is the best available STRAIGHT FLUSH. In other words Ace, King, Queen, Jack, Ten all the same suit.

Bonus Bet or Side Bet

As mentioned earlier it is possible to place a “Bonus bet” or “Side bet”. This bet usually pays out if you are dealt a straight or better but rules vary between Casinos as do the payout odds so check before you place this bet. The “House Edge” on these bets is notoriously high so these are not favourable bets and the general recommendation is to avoid them.

The Best Of Luck.