Caribbean Stud Poker or Caribbean Poker for short is a simplified form of Poker where you are playing against the house and not against other players. It also takes the bluffing element out of the game.
As usual in casino games there are a number of differences between casino sites but the principle of the game remains the same which is beat the dealer. The differences are usually found in the odds paid for various hands and in the progressive jackpots which are often associated with Caribbean Stud Poker. 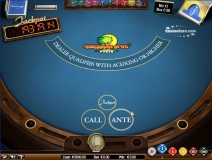 The tables for Caribbean Poker can have a slightly different layout between Casinos but it should be fairly obvious even to a beginner where to place your bet and where your cards will be. A typical layout is shown here.
The game is played with a single deck of cards containing 52 cards (in other words no jokers).
Each deal uses a fresh deck so noting which cards appeared in the previous deal is of no value.
The table will have areas for the “Ante”, the “Bet” or “Raise” and a slot for the progressive Jackpot.

How to play Caribbean Stud Poker

Each Casino has its own graphics and methods of placing bets so we recommend that you read the instructions for the particular casino in which you wish to play. The basic principles however remain the same. Most Casinos have a “Free Play” option that will enable you to practise placing bets.
First select the stake that you wish your chips to represent, then place your chip or chips on the table to indicate how much you want to bet in that particular hand. This is known as the “Ante”. Each hand is played independently so you can vary your stake each hand if you so wish. You can also choose to join in the Progressive Jackpot at this stage but this is optional. This Progressive Jackpot bet is sometimes known as a Side Bet. More about that later.

Once you have placed your ante the dealer will deal five cards to you and five cards to himself. The five cards dealt to you would be FACE DOWN in an actual casino but in an on line casino this would make them pretty difficult to see so they are dealt FACE UP. Of the five cards dealt to the dealer one card is FACE UP and the other four are FACE DOWN.
Your next decision is whether to play or not and you try to base this decision on your chances of beating the dealer. If you decide not to play this is called a FOLD and you lose your ANTE and the Progressive bet if you made one. If you decide to play you must place a bet (sometimes called a Raise) exactly equal to twice your ANTE.

The dealer will then turn over his remaining four cards and the hands can be compared but this is where it gets a little less simple.

To start with, the dealer must have what is called a QUALIFYING HAND which is a hand containing an Ace and a King or better. Poker hands are listed below for those not familiar with the sequence. If the dealer does not have a qualifying hand you win against your ANTE bet at odds of 1:1 but your Bet or Raise is returned.

ONE PAIR: This is two cards of equal value eg: two 2s or 2 Kings. The highest pair is Aces followed by Kings, Queens etc down to the lowest pair which is 2s. If both you and the dealer have a pair, the higher pair wins.

TWO PAIRS: This is similar to One Pair but you have two of them eg: two 2s AND two Kings. If both you and the dealer have two pairs whoever has the highest pair wins. A pair of Kings and a pair of 2s will beat a pair of Queens and a pair of Jacks.

STRAIGHT: This is five cards in sequence that are not all the same suit eg: three, four, five, six, seven; or Ace, King, Queen, Jack, Ten. Ace can also count as one as in Ace, two, three, four, five but this is the lowest straight. The higher straight is the one containing the highest card.

FLUSH: This is any five cards of the same suit (Hearts, Clubs, Diamonds, Spades). In the event of both you and the dealer having a flush the winner will be the flush containing the highest card. Ace, Nine, Seven, Three, Two beats King, Queen, Jack, Ten, Eight.

FULL HOUSE: This is a PAIR + THREE OF A KIND. In the event of an equal hand the highest Three of a Kind will win.

FOUR OF A KIND: This is four cards of equal value eg: four 2s or four Kings. The highest cards are Aces followed by Kings, Queens etc.

STRAIGHT FLUSH: This is a STRAIGHT (see above) but the cards are all the same suit.

ROYAL FLUSH: This is the highest hand and is the best available STRAIGHT FLUSH ie: Ace, King, Queen, Jack, Ten all the same suit.

The Best Of Luck.