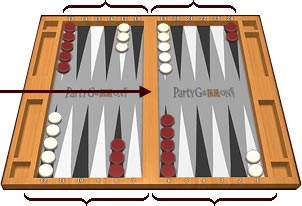 Backgammon is a fast moving dice game for two players played on a board using checkers. It’s origins are thought to go back as far as 3000BC in ancient Persia when a similar sort of game was thought to have been played. Although the rules are very simple and there is an element of luck associated with throwing dice there is also a lot of strategy involved so don’t go in all guns blazing for high stakes until you have some experience.
Here is the basic game:-

A backgammon board is divided into four quadrants. Each quadrant consists of six triangles known as points. The first quadrant is your home board and the points are numbered from 1 to 6. The second and third quadrants form the outfield. This is divided into your outfield, points 7 to 12, and your opponent’s outfield, points 13 to 18. Finally, the last quadrant is your opponent’s home board and the points are numbered from 19 to 24.
The home boards are separated from the outfields by a partition called the bar. This is where checkers are placed after they are “hit” (see later explanation). This corresponds to point number 25 for the player who is hit.
At the start of the game the checkers must be on the board as follows:- Each player has five checkers on his six-point, three checkers on his eight-point, five checkers on his 13 point, and two checkers on his 24-point.

The objective of the game is for each player to move all 15 of his checkers into his home board and then bear them off (see later explanation). The first player to have all his checkers borne off wins the game.

At the start of the game each player rolls one die. The player with the highest number can move first. He has to use the number he rolled and the number his opponent rolled to make his first play. If both players roll the same number, they must roll again to determine the opening roll.
As each player’s turn comes around, he rolls two dice. For each number shown on the dice he can move one checker. If both numbers are identical, the roll is called a doublet. The player can then move up to four checkers.

After rolling the dice, the checkers may be moved following these rules:
• The roll of the dice indicates how many points each checker may be moved.
• A checker may only be moved forward, from a higher numbered point to a lower numbered point.
A checker can be moved to a given point only if:
• There is no other checker on this point, or
• The point is already occupied by the player’s own checker(s), or
• There is only one checker occupying the point, and it’s owned by the opponent.
The numbers of the dice constitute separate moves.

For example, if a player rolls 3 and 1. Then he can move one checker by 3 points and another one by 1 point. However, he may also move the same checker by 4 points if he can legally move the checker first by 1 point followed by 3 points or first by 3 points followed by 1 point. A player must use both numbers of a roll or all four numbers of a doublet if this is possible. If only one number can be played, the player has to play it. If either of the numbers can be played individually but not both numbers together, he has to play the higher number.

It is possible to remove an opponent’s checker from the board, this is called a “hit”. If a player can move one of his checkers to a point where there is only a single enemy checker, he can hit that opponent’s checker. The hit checker is placed on the bar. From a game point of view, a checker on the bar corresponds to the point furthest away from the home board.
When a player has checkers on the bar, he must move these checkers first. A player may not make any other move before he has brought his checkers on the bar back into play. A checker can be brought back into play by throwing the dice and moving to an open point on the opponent’s home board. If a player can’t re-enter from the bar because the corresponding points are wholly owned by the opponent, he must pass his turn.

Once a player has brought all 15 of his checkers into his home board, he can then start the process of bearing them off. A checker can be borne off in the following ways:
• The player may bear off a checker from the point corresponding to the rolled die.
• If there is no checker on the corresponding point, he must make a move from a higher numbered point. If there are no more checkers on higher numbered points, he may bear off a checker from the highest numbered point where there is still a checker.
• If he has an alternative, a player is never obligated to bear a checker off.
• Once a checker has been borne off it cannot be brought back into play.